The Egg of Andy Weir 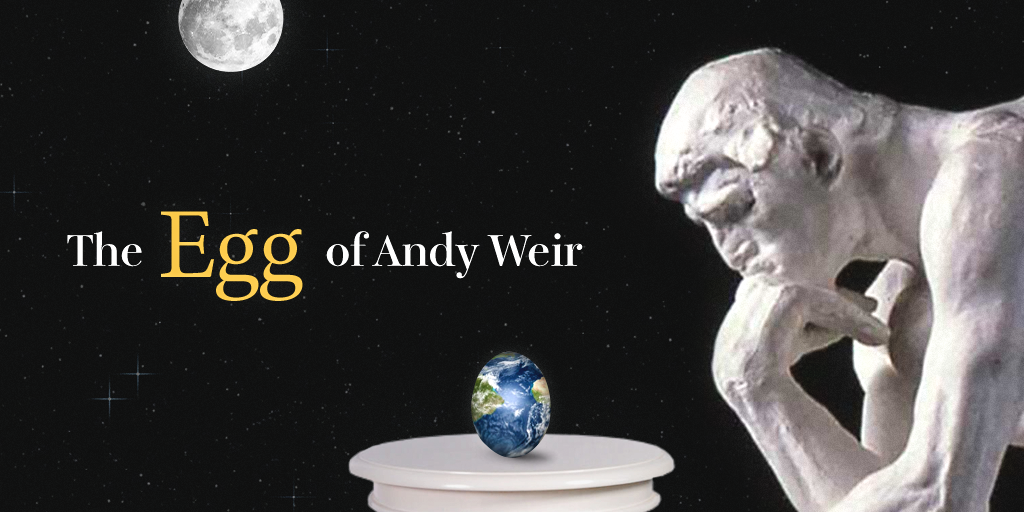 If the name of Andy Weir does not sound outright familiar, then the movie The Martian will. Andy Weir is the novelist who wrote the book in 2011 that was made into the eponymous movie in 2015.

Weir's most famous short story, however, that went through another round of popularity with the movie release and that he published on his website back in 2009 is The Egg. Tallying at around 1,000 words, the story has been translated into over 30 languages by readers and is still bringing today around 100,000 visits to Weir's website monthly.

It's a very good story too.

The gist of the story is this.

A man dies in a car crash and emerges in a place of nothingness where he meets God. God tells the man he will be reincarnated as a Chinese peasant girl in 540 AD. Not only that, but that the man is constantly going through reincarnations through time and that every person the man ever knew directly, including his wife and kids, by proxy, or indirectly like Hitler and Jesus—they have always been reincarnations of this very man. Every person that ever existed in the universe is this man.

If you haven't read the story, read it, it's likely to be worth your time.

The quote of particular interest is where God explains to the man why the universe exists the way it does:

I looked you in the eye. “The meaning of life, the reason I made this whole universe, is for you to mature.” “You mean mankind? You want us to mature?” “No, just you. I made this whole universe for you. With each new life you grow and mature and become a larger and greater intellect.” “Just me? What about everyone else?” “There is no one else,” I said. “In this universe, there's just you and me.” You stared blankly at me. “But all the people on earth…” “All you. Different incarnations of you.” “Wait. I'm everyone!?” “Now you're getting it,” I said, with a congratulatory slap on the back. “I'm every human being who ever lived?” “Or who will ever live, yes.” “I'm Abraham Lincoln?” “And you're John Wilkes Booth, too,” I added. “I'm Hitler?” You said, appalled. “And you're the millions he killed.” “I'm Jesus?” “And you're everyone who followed him.” You fell silent. “Every time you victimized someone,” I said, “you were victimizing yourself. Every act of kindness you've done, you've done to yourself. Every happy and sad moment ever experienced by any human was, or will be, experienced by you.”

Again, the The Egg is Weir's most famous story, and it was relatively popular before the book and the movie The Martian. Why though?

While it's an entertaining concept, I don't think the popularity can be attributed to the movie alone, and the fact that readers from over the world translated the story into more than 30 languages speaks volumes.

I am going to try and give this a little perspective, and whether it's a stretch is, of course, entirely up to you, but it might be worth a little ponder-over.

The term sharing economy started appearing in the early 2000s, and some sources attribute the first use of the term in public to professor Lawrence Lessig.

Sharing economy was a novel idea and required a leap of trust that took a lot of people to make, and it took years for a lot of users and investors to grow on.

What's interesting though is that the concept took a firm root around the same time when the global financial crisis peaked in 2008. When the trust went away from the vertical structures—institutions—and splashed into the state of distributed, social, and horizontal.

If we list a few examples of companies that immediately come to mind when we talk sharing economy, the dates of when they started are telling:

With the collapse of the vertical trust flow came the great new realization of distributed trust models in which people made the great leap and started trusting each other—allowing complete strangers into their apartments, sharing long-distance car rides with someone they never knew, and giving money to people through a website simply because they liked the idea of what was promised and didn't need or want corporations to shove a new product down their throats.

Did people shortcut the empathy distance and realize they were all more or less similar and closer to each other with the rise of the sharing economy? They arguably did.

What's extremely interesting is that the Bitcoin network went live in January 2009. It's fascinating how a lot of the time the humankind and the ideas move in unison and do so without realizing it. The implementation of blockchain, a trustless public ledger, that should be—or already is, depending on what project you follow—the backbone of the distributed, social, and horizontal trust happened at the same time that the implementation of the sharing economy started. Both the blockchain technology and the sharing economy became a success.

When you check the timeline and put The Egg, the collapse of vertical trust, the sharing economy, and the blockchain technology in the same row, you realize we are talking the same thing.

The next wave of development and progress is in establishing transparent and immutable paths for the flow of the energy of trust for the communities—which are the now of the world progress—to truly thrive.